6 ROUTES TO DISCOVER IN URDAIBAI

Local history, nature and culture are the common themes of these routes that are ideal for knowing what not to miss in Urdaibai.

1) THE WAY OF THE MONARCHS

This runs along the Gernika-Bermeo coast on the steps of the ancient Lords of Biscay, who swore the laws of the Basque people under the Tree of Gernika.

Start at the regional town of Gernika-Lumo to learn about the Tree of Gernika, symbol of the rights and freedoms of the Basque Country, the Gernika Jai Alai fronton, cathedral of the cesta punta ball game and the Gothic Renaissance Santa María Church.

In Forua, the Roman town and the 17th century San Martín de Tours Church are essential for learning about the county’s history.

Going deep into the tideland in Murueta, the old tile factory offers a snippet of archaeology. In Busturia we can “step” on the authentic Calzada Real, with its old Txakoli vines. Madariaga Tower will bring us closer to the biodiversity.

In Sukarrieta, learn about the history of the Roman anchorage area, the botanical park of Txatxarramendi Island with beautiful views and take a break on San Antonio Beach.

Mundaka gifts you spectacular views of the Urdaibai Estuary from the lookout and of the open sea from the charming Santa Catalina Hermitage.

The route ends in Bermeo. Arrantzaleen Museoa, the Gothic cloister of the San Francisco Convent, the San Juan Arch or the 16th century Santa Eufemia Church tell their story. You must visit San Juan de Gaztelugatxe. It will take your breath away. 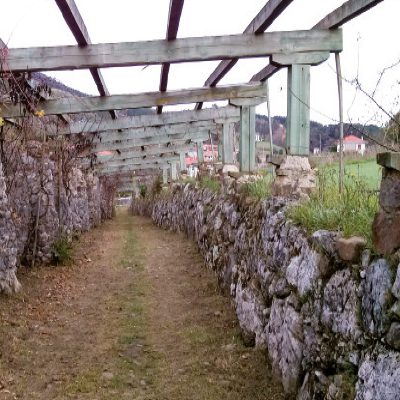 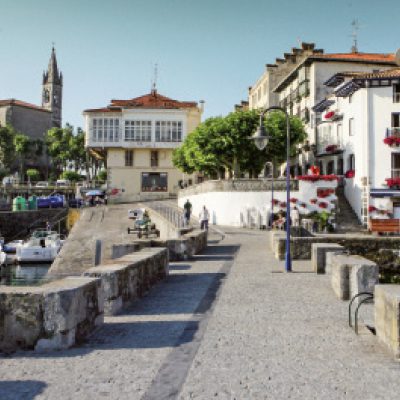 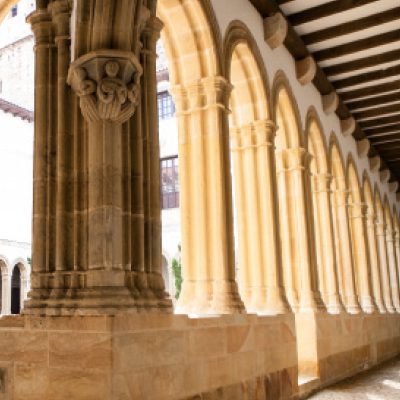 2) THE DOMAINS OF THE HOLM OAK

The beauty of the holm oak reaches its peak around the small towns at the right edge of the Urdaibai Estuary.

In Kortezubi, Santimamiñe Cave immerses you in prehistory; in Oma, the silence of the valley speaks and bewitches the Bosque Pintado. Threatened wild fauna shelters in Basondo.

In the neighbouring Gautegiz Arteaga, take a break at the 16th century San Lorenzo Hermitage and the castle that emerges in the landscape where the migratory birds watched from Urdaibai Bird Center recharge their batteries.

Ibarrangelu is an example of diversity: ophites and dunes of Laida and Laga Beaches contrast with the surrounding holm oaks. As you cross it, the San Pedro Atxarre Viewpoint offers an impressive view of the Urdaibai Estuary, and in the centre of the municipality, take an amazing guided visit to San Andrés Church, with its spectacular dome.

Elantxobe in its vertical layout forges charm and landscape. It is home to 19th century Neoclassical buildings and touches the sea in it small port.

In Ea, its picturesque city, whose structure is provided by the ria and successive bridges, is the counterpoint of its eminently rural neighbourhoods Natxitua and Bedarona, and of its quiet rocky coves, such as Ogella with its high ecological value.

It runs through inland towns with a truly rural spirit that emerge on both sides from the River Golako.

It starts in Ajangiz, natural viewpoint over the Gernika-Lumo valley. The size of its 19th century Ascension Church is quite amazing.

In Mendata, the 16th century Montalbán House Tower, the only one in the Basque Country with a pentagonal floor, and the 16th century San Miguel Church are very special. In the Marmiz neighbourhood, the vestiges of the foundry and the Olazarra Mill evoke a strong link between man and land.

Since the Middle Ages, Arratzu has been the passage of the Way of St James via the coats and in ancient times across the beautiful Romanesque Artzubi Bridge. Santo Tomás Parish has one of the most important Baroque choirs in Biscay. In the Loiola neighbourhood in Arrolagune is the Oppidum de Arrola Interpretation Centre, an Iron Age II archaeological site.

Tour history without leaving the large town of Muxika, with spread out neighbourhoods and dotted with rich historical and cultural heritage.

In the San Román neighbourhood is the emblematic 16th century Muxika House Tower, which was turned into a rural palace after the War of the Bands. San Román Hermitage is a magnificent example of rural religious architecture.

In the direction of the Ibarruri neighbourhood, we can see Etxezarreta Palace, Olabarri Mill and the Gothic 15th-16th century San Pedro y San Pablo Hermitage. Behind it, Santa María Church (1930), Medieval inspired, and a pretty Baroque Way of the Cross. Further on are the Baroque Ormaza Palace and the Potro de Herrar de Ibarruri. In the village of Unda, you can see the architectural beauty of its country houses dating from the late Middle Ages.

In Magunas, eminently rural, San Lorenzo Hermitage, Baroque in style with a wooden choir, stands out.

Nearby is the Balcony of Biscay (Mendata), an amazing inland viewpoint of Urdaibai Biosphere Reserve. 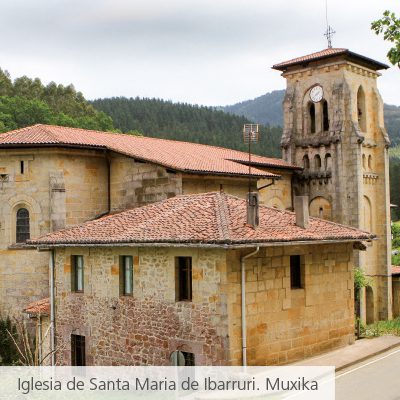 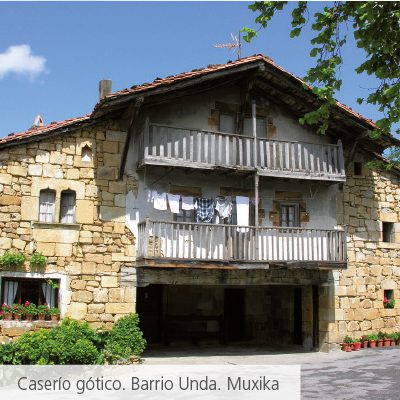 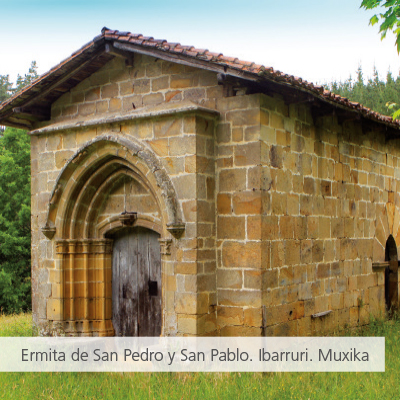 A tour through the customs and traditions of towns and neighbourhoods that are home to authentic natural and cultural jewels.

Start from Muxika, at San Vicente Church, which has great value thanks to the Romanesque corbels of its south facade.

On the way to Morga, above Gerekiz, San Esteban Hermitage, of Pre-Romanesque origin, and its two Roman era (3rd and 4th century) tombstones are of interest. Upon arriving at Andra Mari, the 18th century Zorroza Palace with its double arch support is a precursor and example of the style of many local country houses. In Meakaur, gaze at the Renaissance San Martín Church, with a beautiful Mannerist portal (16th century) in the form of the Arch of Triumph that was a gift. Opposite is the 1766 Santo Cristo Crucificado Hermitage that was founded 1515.

The route ends in Errigoiti. In the Metxikas and Zallobante neighbourhoods, next to a pretty recreational area ideal for families, is the Neoclassical San Lorenzo Church. In Elexalde, the imposing Santa María de Idibaltzaga Temple stands out. Opposite is the great San Antonio Calvary, one of the best iron works in the entire county. Ascend Bizkaigane Mount; the landscape makes it well worth it. 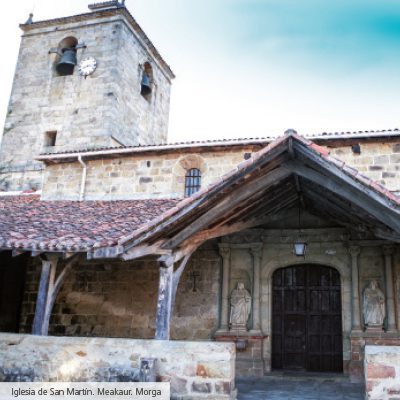 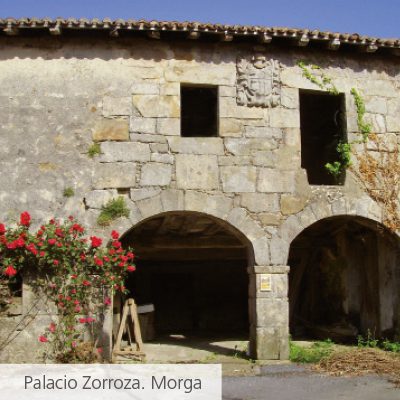 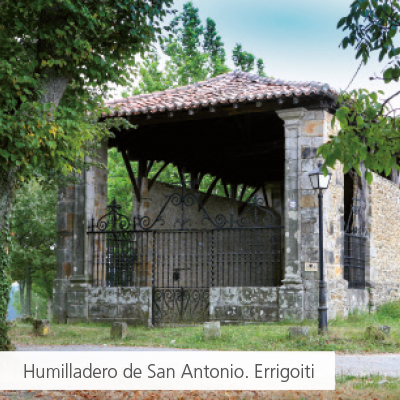 6) FROM PREHISTORIC VALLEYS TO THE SUMMITS OF URDAIBAI

History and nature go hand in hand in this profound and evocative tour.

At the feet of Santimamiñe, in Kortezubi, Oma Valley opens up. An idyllic green and silent spot in which extraordinary country houses emerge and the Bolunzulo and Olakoerrota Mills rest after many years of work.

Nabarniz, the highest town in Urdaibai, is where the tower of Santa María de Gorritiz-Gorostizaga Church, of Gothic origin, rises. From here, you can easily get to the summit of Iluntzar, which offers a spectacular circular panoramic view over Urdaibai and Lea-Artibai.

The Ikazurieta neighbourhood is where the preserved 17 century Ikazuriaga country house can be found, a colossal oak wood structure that is over 500 years old. Lekerika is home to the 18th century Aldekoa country house, with a retracted façade for one or two floors of balconies, a peculiarity that occurs only in country houses in this valley. It has a beautiful coat of arms and porch access with an ionic column. Ascending Mount Arrola affords the view of an amazing fortified town from the Iron Age II that is in the process of an archaeological investigation.

In Ereño, famous for the red stone of its quarries already exploited by the Romans in the 1st century, a raised granary and San Miguel Church stand out, built with the stone from its quarries, like several houses in the city. An essential visit is San Miguel de Ereñozar Hermitage, with exceptional views of the mountains of Duranguesado and of Gorbea, and of the ria of Mundaka and of the sea. The archaeological digs carried out on the summit discovered the existence of several necropolis and even a Medieval castle.